The event was presided over by this year’s President of the Irish Hospitality Institute Fergal O’Connell FIHI (General Manager Fitzwilliam Hotel, Dublin.)

Attendees were greeted by Fergal O’Connell FIHI, as President of the Irish Hospitality Institute with a ‘Cead Mile Failte’, the greeting that offers ‘One Hundred Thousand Welcomes’, embodies the spirit of Irish hospitality, as the 2012 Hospitality Awards began. Fergal welcomes the Guest of Honour, the Minister for Transport, Tourism and Sport, Leo Varadkar TD, who whose wide-ranging portfolio embraces two industries which are vital to our economic recovery, as well as a sports sector which raises our hearts and spirits in the most difficult of times.

Minister Varadkar said: ‘Tourism is central to Government job-creation plans and a Department of Finance study shows that employment in accommodation and food services has grown by 9% since our Jobs Initiative. This evening we honour the managers and the premises in the hospitality sector who have played their part in this success, and who will play a crucial role welcoming visitors to Ireland during the Gathering next year’.

Fergal added – “Highlighting of the importance Tourism plays on the economy he urges for support from the Minister to use his undoubted powers of persuasion to ensure that identified incentives to growth are retained beyond 2013 giving some pricing stability to the sector and ensuring continued job creation and competitiveness. While a lot of work has been achieved by the sector in terms of cost reduction and savings and the despite the travails of recent years, tourism provides 180,000 jobs in Ireland- 11% of total employment. More significantly however, the sector has created 6000 new jobs over the past 18 months- a performance which outshines any other sector of the economy. We are a people-intensive business whose management and employees interact directly and personally with our customers every day of the week.

He concluded by looking forward with confidence and optimism to 2013- ‘The Year of The Gathering’. As we ‘gather’ here this evening, and do so again throughout the coming year, IHI will play our part in this creative and innovative year-long Festival which will hopefully see many thousands of the Irish diaspora visit us and share with us the ‘Irish Experience’.

The main awards were presented and then five enrolments into the Irish Hospitality Institute College of Fellows and a Lifetime Achievement Award. Full press release and award winners are available here.

Shannon College awards and nominees are below:

Shannon Nominees in other categories were:

Well done to both Stephen and Richard on such deserved recognition.

Fellowships of the IHI were also awarded and Paul Gallagher (1987) and Deborah O’Hanlon (Head of Operations, SCHM) were both conferred on the night.

Photographs of Deborah, Aidan, Paul, Richard and Stephen are below. 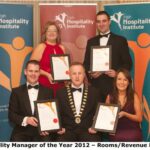 Nominees in Hospitality Manager of the Year 2012 – Rooms/Revenue Division 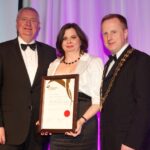 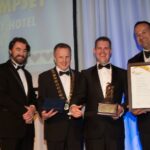 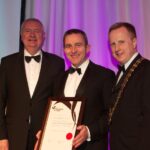 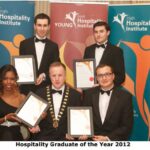 Nominees in Hospitality Graduate of the Year 2012. Stephen Moran (2012) pictured back left. 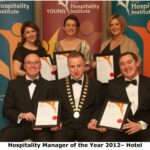