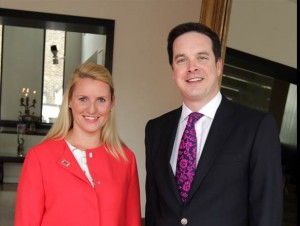 Fiona Burns (2000), Director of Sales & Marketing at The Morrison a DoubleTree by Hilton has won a major award at Hilton’s annual awards ceremony held in Prague last month.

Against competition from sales teams in all the DoubleTree by Hilton properties throughout Europe, Africa and the Middle East, Fiona was announced as

“I am delighted that the hard work of both the Sales & Marketing team & Operations team working together has been recognised by Hilton Hotels with this wonderful achievement for The Morrison a DoubleTree by Hilton. With hard work creativity and dedication, we out-performed all expectations in 2015.” said Fiona Burns

The Morrison, on Dublin’s Ormond Quay, underwent a €7 million renovation in 2013, and under the hotel’s local management team they have increased its Average Daily Rate, Occupancy and Revenue per Available Room every year since. A creative approach to marketing has ensured that The Morrison has retained its credibility as a stylish, chic city centre destination, popular with locals, tourists and the business community. Initiatives such as the ‘Gentlemen’s Afternoon Tea’, the ISPCC fundraising ‘Charity Afternoon Tea’ and the skillful use of Social Media has kept the hotel front of mind with media and key opinion formers.

The Morrison’s General Manager Patrick Joyce said: “Fiona has been the driving force behind our Sales & Marketing team working in conjunction with Operations to deliver and exceed our expectations for 2015. She is a charismatic, intelligent and driven leader who inspires all of the team here to work hard to deliver on our goals. She works closely with all our clients, new and old, in winning key accounts for the company and is a true ambassador for both the Morrison and the Hilton group.”