The NY Chapter had a get together on November 6th in Langan’s and it was well attended by Alumni across the years – those on Year 4 placement and those who completed Year 4 placement quite a while ago!

Some of the Year 4 placement students who attended were Megan Kirwan, Keith Murphy and Neisha Twomey.

The only surviving picture is of the last ones standing! 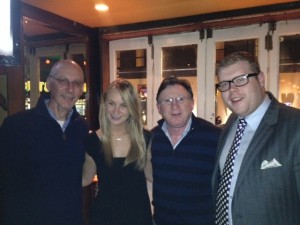 The next get together is January 6th 2014 in Langan’s.