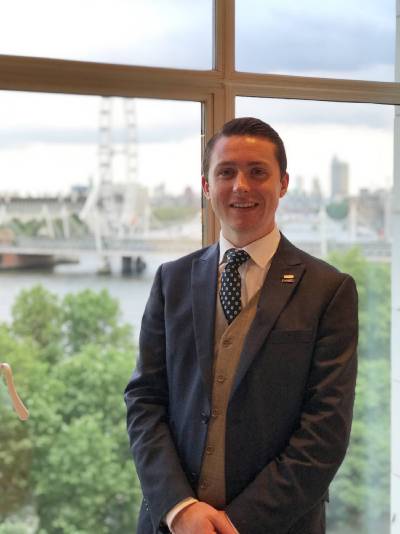 RUAIRI O’Farrell’s role in Guest Relations might see him walk 5km in a day at The Savoy Hotel, London; but when he put down Hotel Management on his CAO form, he landed on his feet.

“I was working during the summer at a local restaurant, Raymonds, in Midleton,” says Ruairi, 24. “I liked it and I thought the hospitality industry was the way to go. When I was accepted at Shannon College of Hotel Management, I was delighted. The course covers all aspects of hotel, restaurant and bar management.

“Hotel Adalon Kempinski, near the Brandenburg Gate in Berlin, was my first placement. That was a great experience where I learned to stand on my own two feet. I worked long hours, which is the nature of the job.”

When he completed his second year at Shannon College, Ruairi worked at Dromoland Castle and then headed Stateside to the millionaire’s playground of Nantucket, courtesy of his J1 visa.

“The Secretary-of-State is a member at The Great Harbour Yacht Club,” says Ruairi. “JFK was a former member of the club.”

Ruairi mingled with the rich and famous, giving him a taste of things to come — as he would later join the Savoy Hotel in London where Winston Churchill brought his cabinet to lunch during WW2.

“Nantucket was the perfect place to spend an idyllic summer,” says Ruairi. “I explored Nantucket beach and I cycled a lot. The members at the club were friendly and I got invited to sail with some of them. They were genuinely interested in getting to know you and there was a family atmosphere at the club. I would have stayed if I could!”

Ruairi felt quite at home.

“You tailored yourself to the people you mixed with,” says Ruairi. “Discretion was key to building trusting relationships with everyone.”

Back home, Ruairi’s fourth and final year was beckoning. He heard good things from his friends about the world-famous Savoy Hotel in London, which is part of the Fairmont group.

“I did the interview for the job and after my final exams, I moved to London in June 2016.”

Read more of this article in the Evening Echo: Be our guest… at The Savoy, like the royals, rich and famous