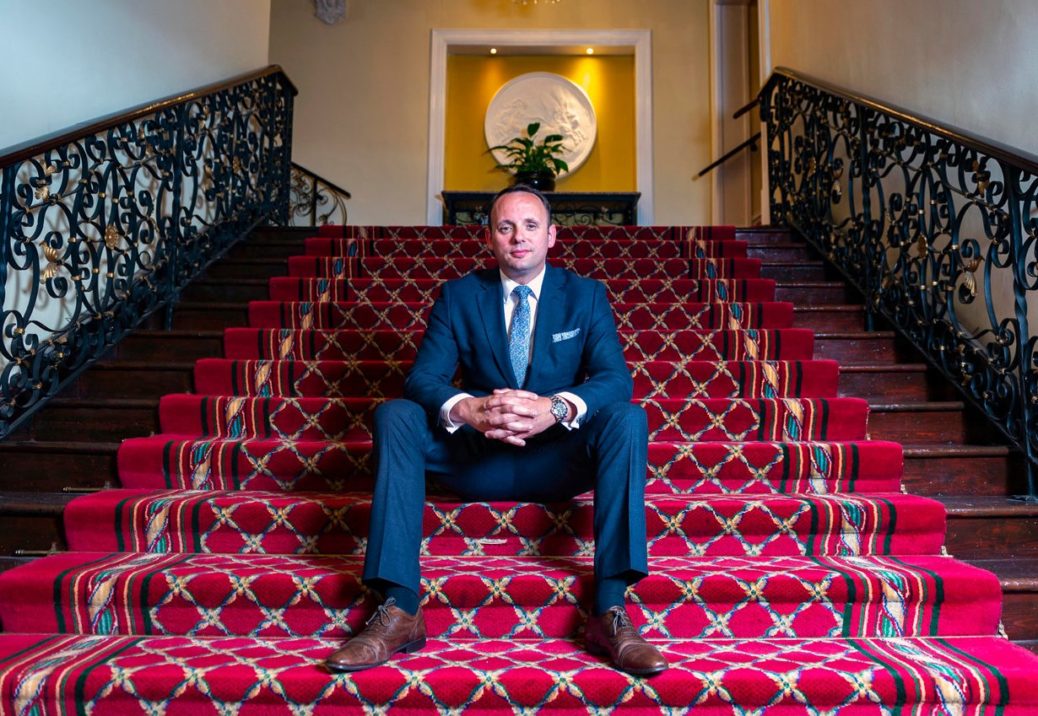 Rebel with a €50m cause to change Cork

There are new additions to MacCurtain Street in Cork’s north inner city, such as the steampunk-themed Cask cocktail bar and hipster burger restaurant Son of a Bun.

But the fast-food outlets, tanning salon, tattoo parlour and casino lend the Victorian street an edgy feel. At one end, MacCurtain Street meets St Patrick’s Hill, the backdrop for one of the scenes of the film version of witty crime caper The Young Offenders.

At the heart of MacCurtain Street is The Metropole Hotel, a 121-year-old Cork institution that has hosted guests such as Gregory Peck and Walt Disney. Built by the teetotal Musgrave family, the premises didn’t apply for a liquor licence until 1956 but went onto become the spiritual home of the Cork Jazz Festival.

However, behind the red-brick facade and tile-pillar frontage, the grand dame of Cork’s hotel landscape is showing her age.
With fresh competitors poised to spring up around the city, The Metropole is about to embark on a complete refurbishment and extension, all linked to a new seven-storey sister hotel across the road called The M.

The man tasked with overseeing the €50m-project is Aaron Mansworth, an impeccably groomed Corkman. He is the group general manager and a director of Trigon Hotels, set up last year by the Stelling Group. The group is owned by a London-based Venezuelan family that spent €5m buying The Metropole in 2015. It also owns the four-star Cork International Hotel at Cork Airport Business Park and the Cork Airport Hotel.
“I think The Metropole went off the scene for a long time. But it’s an iconic hotel and I’m really passionate about bringing it back to that stage,” Mansworth says.

The transformation has already begun. Two days before British royal Prince Charles and his wife Camilla arrive in Cork, in yet another PR coup for the city, Mansworth, who sits on the board of VisitCork, shows off the makeover Trigon has just completed of The Metropole’s 108 bedrooms, including the period-style Jack Lynch suite, where Taoiseach Leo Varadkar is rumoured to have stayed on a recent official trip to Cork.
Smaller rooms with contemporary-style finishes have been rebranded as “city rooms”, aimed at single occupancy and corporate guests. All the en-suite bathrooms come with shiny new fittings and Paul Costelloe toiletries, and USB points have been added to the bedrooms. The front Met bar and bistro, with its dated decor, is due to be revamped in July, with Mansworth already having visited high-end London restaurants such as Scott’s in search of inspiration.

The hotelier sampled his first taste of the hospitality industry at the age of 11, collecting glasses at the family pub in Cobh, which drew its clientele from the working-class ranks of the town’s dockyards, naval service and Irish Steel.

“The pub was where I learned you have to be apolitical behind the bar counter,” he says. “You learned people’s traits and personalities very quickly, and that stood to me because it gave me a gut feeling for people and a work ethic.”
That work ethic proved useful when applying for a place at the Shannon College of Hotel Management: at 16, he spent an unpaid summer skinning chickens in the kitchen of what is now the River Lee hotel just to secure a reference letter. After a second-year college placement in Lausanne, he spent the summer of 1997 working at Marlfield House in Gorey, when Steven Spielberg and Tom Hanks were staying for the filming of Saving Private Ryan at Curracloe Beach. At Marlfield, he also met his future wife.

A fourth-year placement in New York was supposed to last just 12 months, but Mansworth ended up staying almost eight years. Five were spent at the Waldorf Astoria on Park Avenue, where he met the Clintons and received plenty of mentoring from managers.
“Four of the banquet captains I worked with had 180 years of experience between them at the hotel and would tell you stories about Frank Sinatra and JFK,” Mansworth says. “At the Waldorf, I developed my management style, which is about getting people on board, inclusiveness, empowering people and making sure they enjoy their job.”

After a spell at The Carlyle on the Upper East Side, where he saw Woody Allen play clarinet with his jazz band every Monday night, Mansworth was head-hunted for his first general manager post, back in Ireland.
“It was during the Celtic Tiger, and myself and my wife were saying ‘how are all our friends at home buying houses and cars and coming to New York twice a year to see us while we are living in a two-bed apartment out in Queens and working 70 hours a week?'” he says. “An Irish guy who my wife worked for in New York asked us to run his hotel in Cavan. He put a good package in front of us so we came home.”

After three-and-a-half years managing Crover House in Cavan, he ran the resort operations at The Heritage in Co Laois. He then became general manager of the Cork International Airport Hotel and managed both it and the Parknasilla Resort & Spa after the Bernard McNamara-owned properties were placed into receivership when the property developer went bust in 2012.

Through a management company called Philip Hotels, the Stelling Group bought the two airport hotels and has invested as much as €4m in refurbishing the properties since 2015. After acquiring The Metropole that year, Philip Hotels spent a reported €1.3m on a neighbouring site fronting onto St Patrick’s Quay. That Harley Street site is home to a vacant barrel-roofed building that housed the PJ O’Hea garage, a business that succumbed to the recession.

Under the Trigon brand, the site will become The M, a contemporary urban 228-bed hotel similar to those operated by CitizenM. The Dutch hotel chain has used modular construction to build properties in trendy parts of New York, Amsterdam and London with large communal living spaces decorated with abstract art rather than lobbies. Guests use tablets for self-service check-ins and to operate in-room functions such as mood lighting and TV.

Trigon received planning permission – albeit with a number of conditions – for The M and The Metropole project in the spring, with construction due to start on the former next year. Once The M has opened, The Metropole will shut down for its restoration and expansion.

The standout feature of the new Metropole will be a central winter garden and courtyard restaurant with a Victorian-style double-height glass atrium. The two-block building with have boutique retail units, a penthouse on the seventh floor, a rooftop bar, new spa facilities, and an extra 140 bedrooms.
It will be connected to The M by covered pedestrian bridges at first- and sixth-floor levels. Some 300 people will be hired during the construction phase and The Metropole will have 200 employees when it’s finished.

The Trigon project is just one part of a flurry of Leeside hotel construction. Dalata Hotel Group, the country’s largest hotel operator, is opening a 230-bedroom, six-storey Maldron hotel at the junction of Beasley Street and South Mall in December.

BAM, meanwhile, is planning a €400m-redevelopment of Horgan’s Quay, including apartments, offices, and a 136-bedroom hotel with a rooftop garden. At Sullivan’s Quay, the old tax office and government buildings has been demolished amid plans by BAM to build a four-star, 193-bedroom hotel and almost 7,800 sq m of office space there.

Mansworth, who is also national vice-president of the Irish Hotels Federation (IHF), estimates that the number of bedrooms in the city will soon double to about 2,600 and that €20m was spent on refurbishing hotels in the city last year. He believes the pipeline of new hotels needs to be “channelled properly” to prevent a glut of properties “flooding the market or the kind of race to the bottom that happened a couple of years go”.

During the recession, the city “went down to ridiculous rates, with four-star hotels selling rooms for less than €40 a night“, he recalls.

Occupancy rates in Cork city and county have been on an upward trend since 2010 and can reach 95pc during the summer season.
At Trigon’s three hotels, revenue per available room jumped 30pc between 2015 and the end of last year, with the average daily rate climbing 20pc, “albeit from a relatively low base”.

However, not all hotels in the region are out of the woods, so the Government needs to maintain its 9pc Vat rate for the industry, Mansworth argues.

“We have hotels in Co Cork that are only running at 50pc occupancy. So we need the lower Vat rate not as a discount but as a competitive tool. There are only two or three European countries on more than the 9pc.”
Driving long-term demand for Cork hotels is where PureCork comes in, he says. The consumer tourism brand, which positions the city and county as “Ireland’s Maritime Haven”, was launched this summer by VisitCork, a public-private partnership that includes the Cork branch of the IHF, as well as the city and county councils.

“PureCork is linking in the Wild Atlantic Way and Ireland’s Ancient East and making sure everyone is working together so there is no brand confusion,” Mansworth says.

“It’s about keeping Cork busy indefinitely. And I think Cork can be the next Barcelona of Europe.”

Currently reading:
It Worked for Me: In Life and Leadership by Colin Powell

Last box set
The Sopranos, “for about the tenth time”

What is the biggest challenge faced by the Cork hotel industry at the moment?
Costs are a rising factor, especially because of the housing crisis. There is a lack of accommodation for staff.

We need people to come into this industry and the biggest thing that will give hotels a competitive advantage is if they have staff accommodation. Hotels used to provide this but few do so now.

I have held career briefings in Copenhagen, in Sweden and at a Chicago culinary school, and there needs to be a lot of accommodation for people if they are to come to Ireland to work.

What did you learn from running hotels that were in receivership?
When you don’t have money to spend, you learn to manage it and get bang for your buck and become a little bit frugal. I always keep an eye on the past, when people might have lost the run of themselves, and we keep our cost base very tight.