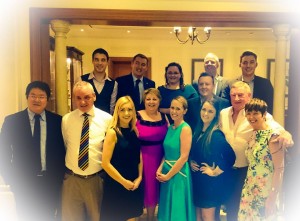 Richard Collins (1994) graciously hosted a get together for the UAE Chapter on May 24th 2015 in JW Marriott Hotel, Dubai.

Laura Allen (2011) did all the behind the scenes organising and emailing to ensure that everyone who could attend was there!

Kate O’Connell (Class of 1980 and Registrar SCHM) attended the event and said a few words on the night.

Many thanks to everyone who attended and made it another great SCHM Alumni event. Click on the gallery below for more photos of the night.