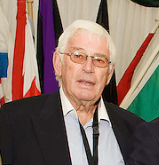 The hotel industry has lost a legendary figure with the sad passing of Tom McCarthy O’Hea from the Ardilaun Hotel, Galway.  Tom passed away on March 28th 2018.

Our thoughts are with his family including his son Justin (Class of 1996), his colleagues, friends and classmates at this very sad time.

Tom’s classmate Brian Cronin read a wonderful tribute in his Eulogy – he really captured the essence of the great man.

“Tom was an hotelier par excellence, a warm and welcoming host, and many of the young people who trained under him in the Ardilaun, and before that in the Gresham and elsewhere owe their subsequent success to the very high standards he insisted on setting both for himself and those who worked with him.”

Brian also commented on how he had to undergo a change of name when he joined Shannon College in 1960 – all because of Tom!

“He was my friend for 58 years. Many of you don’t know this but my name isn’t really Brian at all. It’s actually Tom and always was up to my 16th year and still is to my family and old friends.  However in my anxiety to join Shannon Hotel school 58 years ago I was persuaded by our eccentric hotel school director Jorgen E. Blum to change my name to my second Christian name, which I had of course never used, as he already had one Tom in the class and as I was a late replacement in joining the class the the other Tom had preference.. That little scenario has caused confusion in my life ever since – thanks to you know whom- and was
to set a pattern for the next 58 years. Tom took great delight in repeating this story on many future occasions and insisting that he was the ”real Tom”.

The eulogy summed up a great man very warmly – you can view the eulogy >> here.

Funeral details are available on >> The Irish Times.

May Tom rest in peace.