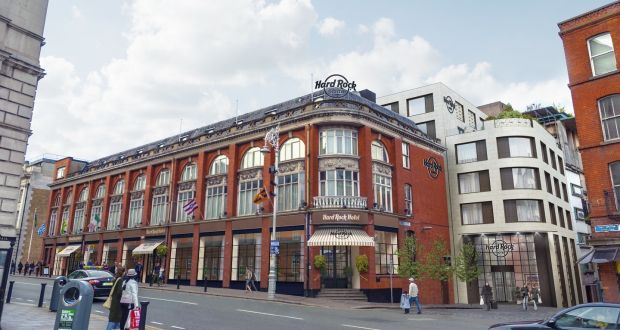 Irish hospitality group Tifco is bringing the Hard Rock Hotel franchise to Dublin as part of a €30 million development.

Tifco plans to open an upscale 120-bedroom, four-star hotel under the Hard Rock brand in early 2020, with the hotel set to have a “subtle” music bent.

Located on Lord Edward Street, opposite City Hall, the hotel will comprise two buildings – the red brick Exchange Buildings, which date from 1912 and was previously the location for the Parliament Hotel, and the adjacent Fashion House Building, which is being rebuilt and will provide the entrance and reception. A new glass link bridge will connect the properties.

Speaking to The Irish Times, Tifco’s chief executive Enda O’Meara (1987) said he was “really excited about” securing the Hard Rock franchise, adding that the new hotel would “stand out from the crowd” in Dublin. “It’s a terrific location . . . [and] our early sales activity has been encouraging,” he said.

Mr O’Meara said the ground floor would have a “cool food and beverage” offering, while there will be live music each night and the hotel will also have a Rock Shop, selling rock’n’roll memorabilia. Read more in The Irish Times […]