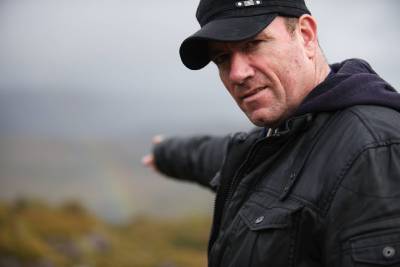 FROM working as a jarvey in Killarney to directing Saoirse Ronan’s father in a film, Cork man Damian O’Callaghan has had an eventful career.

Originally from Mayfield and later Mahon, Damian, who is in his early 40s, says the job of a jarvey isn’t just about driving a horse and carriage. Having brought tourists from all over the world around the sights in Killarney, he says the job is a bit like being on stage.

“You’re telling the tourists stories,” he says. “It’s the best job in the world. If it was all year ‘round, I’d still be at it. But it’s a seasonal job and because I had to get a mortgage, things changed. I had to be more responsible.

“I’m trying to work at my films full time. I went back to college as a mature student at Shannon College of Hotel Management where I got a business degree.”

Damian’s creativity came to the fore when he wrote a play, Let’s Be Frank, in honour of his late friend, Frank Hennessy, a comedian from Tralee. It was staged at Siamsa Tíre in Tralee in 2011.

“The play got so much praise that I was asked to do another one. But I decided to move from the stage to the screen. I made my first film, a short, called Bouncer’.”

Damian has worked as a bouncer in the pubs and clubs of Cork. The film did well at film festivals, including the Cork International Film Festival, in 2013.

Read more of the story From movie buff to film-maker